Blue Ocean Strategy was a seminal work that came out of INSEAD in 2004.  Written by Rene Mauborgne and W. Chan Kim it presents the concept of value innovation through a range of models which help the reader to look at the world of innovation as though the landscape, or should we say seascape, in which an organisation competes, is a sea awash with blood; Red Oceans in which sharks and other predators are swimming.

The authors encourage businesses to find new ways in which to compete; to create Blue Oceans.  In Blue Oceans there is no blood in the water; at least in the first instance.  Just clear blue water where no competition exists.

The key criterion of a Blue Ocean is the simultaneous realisation of ‘off the scale’ cost reduction for customers and suppliers and ‘off the scale’ rises in customer and supplier value.  The sweet spot which arises when these characteristics emerge is the holy grail of businesses. In our world we call it Enlightened Procurement.

We at JMCL are motivated by increased efficiencies, in other words doing more with less.  We back ourselves to take risks and generate customer benefits from which we are rewarded.  Ours is not a world of slash and burn though; ours is a world where we strive to innovate customer value as a source of competitive advantage.  Yes, we look closely at all costs and in doing so challenge ourselves to find better ways of doing business.  We find that by keeping the ambition of Blue Oceans in mind we can work with customers and suppliers to win-win outcomes.  These win-win outcomes are rarely low hanging fruit because we recognise that most organisations take a good look at themselves from time to time and take these opportunities.

Enlightened Procurement as a source of competitive advantage… 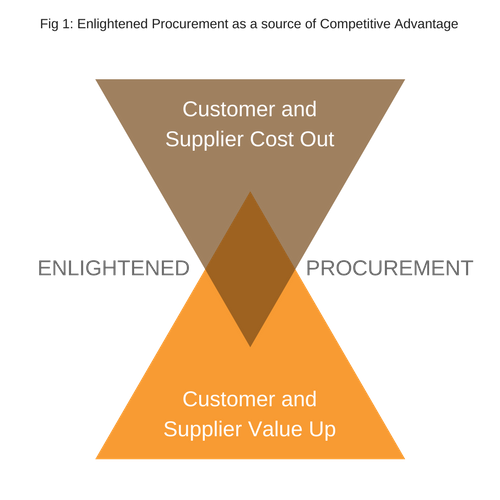 A recent example of JMCL delivering value innovation as Chan and Maubourge define it was in a multinational healthcare organisation which had been buying packaging for years and had worked on specification and just in time deliveries from suppliers to their factories.

The organisation had grown through acquisition and there was territorial commitment to certain legacy suppliers meaning that 22 factories were being served by 18 suppliers.  All suppliers provided a similar quality and service into their customer factories however the different factories didn’t see it this way.  This was a barrier to the realisation of value innovation.  Only a few suppliers were multi-national across the territories in question.  Another barrier.   In addition, the portfolio of end customers were increasingly requiring smaller order quantities.

JMCL worked closely with the client organisation to break down the inbound goods into key critical elements.  A progressive negotiation, using principled negotiation techniques, was utilised to funnel the supply base into a few likely candidates who could think differently.   A new specification of supply was created against which the final few suppliers made a bid linked to an extended contract duration.

The outcome was that a single supplier was awarded the business with appropriate risk management arrangements in place.

The supplier utilised its critical printing assets centrally to good effect and then delivered printed card on pallets into the customer factories where finishing equipment was installed in the on-site warehouse.  Batch printing, folding and gluing was done on site in the required batch quantities.

The process to realise this new way of doing business was conceived and delivered with JMCL know how and subject matter expertise.  This brave new world will see the JMCL customer profitably swimming in Blue Oceans while the market struggles to catch up.

Contact JMCL today to discuss how Enlightened Procurement can deliver competitive advantage to your organisation.

Previous ArticleNext Article
We care about our clients and our reputation is built on the value we place on relationships. We deal with people so we relate to, and empathise with, our clients on a human level. And we have a sense of humour.